What can you do to help?

Visit: The number one thing you can do to help Nepal is to travel to see it for yourself. So much of what is needed in Nepal revolves around influxes of tourism. Almost every way of life in Nepal is affected by the ups and downs of tourism. This is not in the budget for all people, so…

Donate: Even small donations help us work towards getting out their story with the film and to send money to the individuals and families we know it will benefit most. If you have checked your coffee fund, your rainy day fund, and even scoured the couch cushions and there is nothing to be found that you can spare…

Share: Help get this out in your networks, where it can reach other people that can help.

If we all do what we can when we can do it, we are all part of the movement to make our world a better place.

Contributions of ANY amount are gratefully accepted.

You can also make donations to our GoFundMe fundraiser.

After some weeks of transitioning my position at work into the next hands, trying to organize for this trip, and putting my physical home, once again, into storage, I was grateful when my normal inner calm returned as I sank into my seat on our flight out of Seattle.

Seattle to Vancouver to Guangzhou to Kathmandu to…Nope, wait, the flight from Guangzhou, China to Kathmandu, Nepal is cancelled. There goes our one buffer day to pick up need supplies for the trek. (Thank you, Glen, for handling that for us.) A night in a hotel in Guangzhou with our fellow waylaid passengers meant we met a great group of people who were excited for their upcoming adventures. One of many great things about meeting other travelers-by-choice.

One of these was a fellow who is guiding a Discovery Channel film crew up Everest to film some dude base jumping off the summit in a squirrel suit…as you do.

We finally get to Kathmandu on Monday evening (having left Seattle on Saturday morning), in the middle of the Hindu new year celebration, hauling suitcases, backpacks, and gigantic duffel bags full of donation clothing, through the packed streets.

We get to our rooms, start organizing what needs to go where, and having Glen pare down our trekking items into necessities-only. By the time we are done with this (and a quick glance out on the streets at the tail end of the new year celebration), we have three hours left to sleep.

No, wait, scratch that. Luke and I are still a little wired from traveling. After giggling like 8 year olds at a sleep-away camp when we should be sleeping, we get about an hour and a half of sleep, before getting up at 5am to catch our flight from Kathmandu to Lukla, and begin our first day of hiking.

We would not want to make any of this easier on me, would we.

Lukla: “The most treacherous airstrip in the world”

I had been looking forward to this flight all week, since I had learned of its reputation. I was pretty disappointed by the uneventful flight and the gentle gliding into the landing. (The flight from San Francisco to Medford to visit my brother, John, in Ashland, OR, was by far more exciting.) I resigned myself to the idea that not exciting was ultimately better than too exciting, and moved on to the rest of the day. 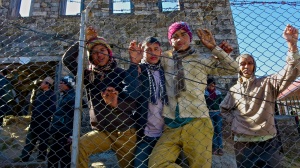 As porters were being organized, Luke and I opted to add two personal porters for our packs. This was a decision for which we were grateful every single day for the rest of the trek, not only because of the weight of his camera gear and my inexperience, but because it meant we provided two more people with an income for those few weeks. $250 well spent.

For the rest of our group, all avid trekkers/outdoorsy people, the attitude was, “What? It is just walking.” As we started hiking up the inclines soon after we began, I would have to disagree. It is more like endurance Tetris with your feet, stepping on or around rocks, that may or may not be stable, with each step. I am not the most graceful person on flat ground, so my “training” may have been improved by that dancing video game that lights up dance steps on the floor for you to follow. No matter.

I was pleased by the muscle memory of breathing in through the nose and out through the mouth. Less pleasing was the overpowering sound of my breathing seeming to have my eardrums in a wind tunnel.

The several hours of hiking on this first day (on an hour and a half of sleep, and two days of travel from the other side of the world) became a repetitive cycle of sucking wind until I could no longer listen to the sound of it, stopping to slow and recalibrate my breathing, and starting again, along with a fairly steady passing by people with hands pressed together in front of them, “Namaste.”

Biggest lesson learned on the first day of hiking: You cannot climb a mountain the way you climb a long flight of stairs, taking it two or three steps at a time, even if you are built, as my mom would say, “like a flamingo”. Hiking, it turns out, is much more of a trudging thing than a sprinting thing. 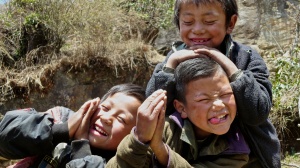 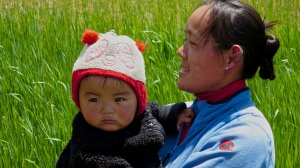 Namaste (You knew I would have to talk about it, didn’t you.)

Not having been a participant in yoga, Namaste is not a part of my vernacular, nor am I certain of the definition. Not having access to the inter webs here on the mountain, I am going with my vague recollection that it means, ‘The divinity within me greets the divinity within you’.  In a ‘God is in everything and everything is God’, Spinoza, sort of way. I can dig it.

It is an interesting perspective of respect in a culture that operates openly on a caste system. As I find my way up these mountains, I am met at every turn by someone greeting my inner divinity, most often by children who are too young to understand the implications of where they might stand or my being considered casteless.

[Sidenote: So many wonderful people were kind enough to send along letters for me to read on the mountain, so I thought I would include bits from them with these entries…]

Bits from the letters ~

“In the army we had a tradition. When we rolled out of our bunks in the morning, we would say “X, and a wake up!” “X” being the number of full days we had left before that final wake up and getting the hell out of there.

Let this be your mantra when you wake up, and you feel you can’t go on, which will probably be days 2 through 20.”

“Remember, pain is weakness leaving the body. Next time I see you, you will be the strongest person I know.”

Donate to the film. Any and all contributions make a difference.

***You can donate through the GoFundMe campaign, as well as share the link and encourage others to donate:

***You can donate through PayPal here: