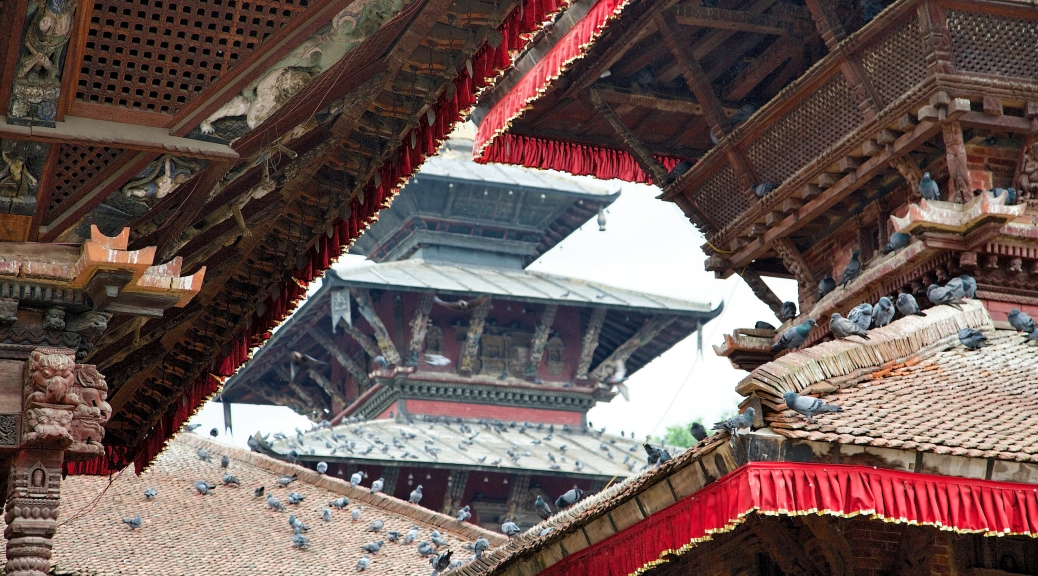 Kathmandu. Capitol City. Urban center. Cultural hub. Gateway to the diverse and mysterious country of Nepal. The cultural stew of this city bursts forth with a beautiful cacophony that assaults the senses.

My eyes, ears, and nose were filled with a litany of new sights, sounds, and technicolor smells. Our late night arrival into Kathmandu weeks before meant that I was experiencing this exotic and hectic city for the first time as I climbed off the little puddle jumper from Lukla.

It is an understatement to say that experiencing Kathmandu is like taking a hyper-charged journey into the human condition. As I wandered down the streets of the Thamel neighborhood, the central historical, cultural, and tourist district of Kathmandu, I quickly learned a simple truth about urban Nepali life. Personal space does not exist in this city. And that is perfectly ok. Locals, international tourists, vendors, cars, rickshaws, motor scooters, cows, dogs and chickens all interact in an intricate symbiotic dance on streets the width of Seattle’s Post Alley. Vehicle horns blurt from every direction. Shopowners call out from every door. A diverse swath of humanity flows throughout. And, almost everyone offers a warm smile and a courteous “namaste” as you cross paths and share gazes.

After settling into our rooms at the Lhasa Guest House and cleaning up a bit, the group of happy trekkers converged on a middle-eastern restaurant for dinner in the more touristy part of the Thamel neighborhood. Even though we were seated traditionally on the floor, and the power went out halfway through the dinner (during which time the staff seamlessly restored the ambiance with candles), the cozy and casual atmosphere felt luxurious compared to the typical rustic surroundings we had in the Himalaya.

I puzzled over the paradox of material security and creature comforts as we ate. Had I had my first full experience with Kathmandu before going on the Himalayan trek, it would have definitely felt like I was in a developing nation. The water is undrinkable – you can not even brush your teeth with it for fear of spending the next couple days violently ill. The electricity goes out for 6-hour periods a few times a day when Nepal’s sale of power to India peaks, and the schedule is typically different every day. The air pollution is tragic. The streets are managed chaos. The bathrooms in some buildings make the sets of all seven films in the Saw franchise look like European spas.

Yet, I felt after having a cold shower in my hotel, drinking a cold(ish) beer, and sitting down in this restaurant that I was in the lap of luxury. What’s more, the hospitality I received from everyone I encountered was the warmest, most genuine I have received anywhere. Nepal may be an extremely ethnically and geographically diverse nation, but their hospitality never wavers. Even though Kathmandu is crowded, polluted, and has significant basic infrastructure challenges, seeing the contrast in lifestyle between this rapidly developing city and that of the people in the remote villages in the Himalaya was striking. Life in Kathmandu has significant challenges for the locals when compared to American standards. Yet locals in the capitol city were the first to tell me just how amazed they are at the difficulty of life in remote parts of their country. Those who have been lucky enough to travel to those areas talk about it as though it is like visiting another country altogether. I have to agree.

While reaching Kathmandu meant that some of our group would part ways for other parts of Nepal, it also meant reunion. As soon as we made it to town, I was able to meet up with my old friend, Tatiana, who had been spending the prior several months studying to become a Yoga instructor in Thailand. Tatiana and I then welcomed Jenn into the sleepy early-to-bed city of Kathmandu when her flight arrived late at night. The three of us sat up for hours having a couple beers, reminiscing, and planning our next few days of exploring the art, culture, food, and architecture of this amazing city.

One of our first stops was the famous Kathmandu Durbar Square. Durbar Square is home to many temples and palaces, and was the location of the royal Nepalese residence until the 19th century. More importantly, there are no cars allowed in the general area. It is a fabulous place to enjoy the classic architecture of the city.

As we walked through the square, enjoying the scores of pigeons that were fluttering everywhere (they are seen as a positive sign and are treated with respect by locals), we were approached by a very friendly, soft-spoken Nepali man. He introduced himself as Ram and explained that he has been a cultural tour guide for 17 years. He asked us if we would like to hire him for a very modest 200 NPR (about $2.10) per person for a tour. I could see the usual American skepticism start to creep across Jenn’s and Tatiana’s faces. When someone approaches a group of American tourists offering a product or service out of the blue, I have noticed a natural tendency for us to say things like, “oh, that’s ok. I just want to wander around and look at stuff myself. I am just casually passing through. No thank you.” Thankfully, we swallowed our western-bred reticence this time and took him up on his friendly offer.

Ram, as it turned out, gave one of the best historical, cultural, or religious tours I have ever had. After we had spent two hours with him, he was even inviting us to his home and offering to arrange any possible trip we would like to take in Nepal. I was quickly learning that one of the best ways to experience Nepal is to fully embrace the locals and take them up on their offers. Sadly, we were not able to take Ram up on his, as we had already made plans for later that day. He taught us an important lesson in trusting the locals, though, that would open up amazing opportunities time and again throughout the remaining trip.

The next day, Tatiana was feeling a bit ill (she did not previously know about the danger of brushing teeth with tap water), so she elected to rest while Jenn and I visited the Garden of Dreams. The Garden of Dreams is on one of the busiest streets in Kathmandu. Once inside, though, the sounds and smells of the city melt away into a serene oasis. This garden, originally built as the Garden of Six Seasons in 1920, was restored with the help of the Austrian government between 2000 and 2007. It is a meticulously manicured garden of terraces, pavilions, and nooks and crannies for the most discerning pair of lovers looking for a romantic escape or a weary tourist looking for a quiet place to enjoy a cup of tea and a book. They even have wifi…